Because it’s the beginning of a new year, many people have recently asked me what my resolutions are.  When I tell them I don’t have any, they look at me like I’m an underachiever.   And when I don’t share what my goals are, they assume I haven’t set any.

Until I tell them why.

What I came to realize and experience (10-15 years ago) is that resolutions rarely stick.  Most people that I have known to make them, myself included, rarely followed through on them by the end of the year.  This prompted me to take a deeper look at why this was so.

To a word geek like me, the words you use need to match up with the actions you are planning to take or messages you are intending to convey.  So I went directly to the underlying meanings.

A resolution, by one definition is:

1) A firm decision to do or not to do something.

2) The action of solving a problem, dispute, or contentious matter.

In #1, we see that we’ve made a firm decision to either do or not do something.  Ok, fine, great, we’ve made a decision, and there is the option you will or will not do it.  Then what?  What is your driving force to stick with the doing or revert back to/default to the non-doing?

A decision with nothing behind it is simply that:  A decision.

I believe the bigger issue, however, really lies with #2.  Resolution has the connotation of being a problem solver:  A problem that is filled with dispute and/or contention.  When people view an issue, or desire, as being a problem, the thought process that generally follows, goes along the lines of something needing to be fixed.   Here’s what I know:

Most people do NOT want to be FIXED.

In fact, many rebel against it.  We don’t want to be seen as broken.  Nor do we want to feel that way.  This little ditty, right here, is one of the main sources of contention in interpersonal relationships.  When one person feels that the other needs to be fixed, bigger problems in the relationship arise.  Not only is it impossible to fix someone else; it is even more difficult to fix yourself, if being broken does not match the way you wish to view yourself.  After several years of buying into the victim mentality, I, for one, stopped believing I was broken.  I did agree, however, that I could use some improvements and deserved more successes.

This then led to goal setting.

A goal, aside from being a huge player in sports, is translated from various dictionaries as being “the object of a person’s ambition or effort, an aim or desired result – something you are trying to do or achieve”.  Again, so you have a desire, ambition, effort and aim… so what?  How are you going to get there and what are you going to do about it?

In 2011, when I completed my Law of Attraction Coach and Passion Test Facilitator certifications, and made the decision to start my own business, goal setting became my new vice.  I studied all the techniques of how to get clear, get organized, “chunk it down” into bite sized pieces, “find your Why”, etc…

It worked pretty well… for a while… here and there… sort of.

While I knew what my goals were and had some idea of how to get to them, I often fell short on many of them.  Unfortunately for me, and many others who have the same issue, the big ones that really mattered were the ones still left unattained.

When doing some soul searching after a few years of seeing this pattern, in myself and others in my circle, what really seemed to be missing was:  the commitment to see that goal to its fruition.

A commitment is not just an action, or a step, it is a deep down feeling and desire.  It is an act of dedication.  It’s a promise. 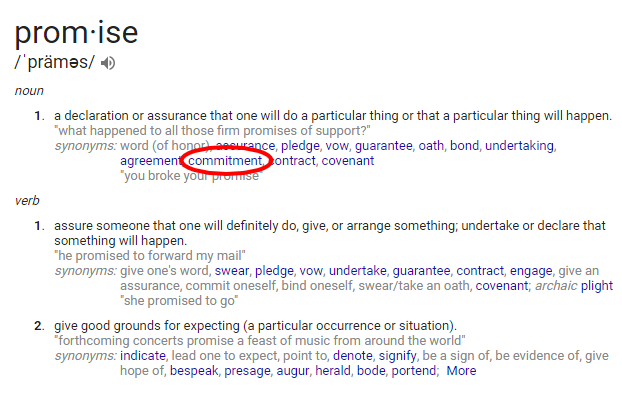 The verb definition to “give good grounds for expecting (a particular occurrence or situation)” sounds so much more positive and promising than resolving to fix problems and set goals.  For without the good grounds to land on, or a solid foundation in which to build your intended goals upon, they will continue to evade you.  A deep seated vision AND a commitment to that vision is required.

It has to ROCK YOU to your very core.

I discovered this accidentally.  Last year.  … When I finally made a true commitment to me.

My body had gone through some major changes over the previous 7 years due to a massive health crash and I was slowly, but surely, gaining ground.  Going from a period of barely being able to walk, to being able to get out on the dance floor again was a major hurdle I had already jumped.  Since I had achieved considerable amounts of range of motion in my joints and my energy levels were such that I could sustain a few hours at a time, the only real goal I had set was to regain my long-lost “dancer’s body”.  Having earned a Fine Arts degree in art, theatre and dance in the 90s, I wanted to surpass the dance floor groove and get back to the strength, flexibility and stamina I had when I was in school.  I couldn’t remember what that looked or felt like and had no real, solid idea how I was going to get there.  All I knew was that I wanted it.  BADLY.

I made a commitment to myself to figure it out and started taking action steps to in order creating the vision.   I asked myself:  “What do I need to commit to doing to make this happen?”

A few of the things I tried, such as yoga and going to the gym were helpful, but did not excite me.  After putting my mind into “dance” mode, more ideas that “fit” the vision became clearer.

Thinking back to dance class days, I began doing “ballet barre” exercises at the kitchen stove.  (Hey, it has a bar!)   The memory in my body started coming back and it became easier bit by bit. Things in my hips began loosening up and the swivel that had been missing on the dance floor returned.   I began to feel what it was like having the dancer’s body again.

Several months later, out of the blue, I received a text from my cousin containing a photo of my son and me dancing at her wedding.  It was the same year I graduated from college.  I was wearing a dress and heels and could literally see the well-defined muscles in my legs and the joy on my face.  Now, that I had the visual of what it looked like, there was no stopping me!  I was committed to feeling that way, looking that way, and (although he is taller than me now) dancing with my son that way again.

Having the feeling and the vision, my body, mind and spirit were in sync and dance moves, I hadn’t been able to do in years began coming back to me.  By the end of the year, I was pirouetting across the dining room!

Here’s the other thing that helped me:  I kept it to myself.  I shared it with only a couple people I needed advice or support from.  So many times I had talked and talked about what I was doing and expelled tons of energy in doing so, leaving not much left for actually doing the thing I was talking about.  The idea behind this concept of continuously “putting it out there” was to be kept accountable.  This might work great, if the commitment you are making is to others, but if it is to yourself, the only person you need to be accountable to and could potentially disappoint is you.  I’ve finally reached a point in my life where I don’t care as much about what others think, so this concept rarely works for me anymore.  Sadly, I am not afraid to fail in front of others.  I’ve already done it, many times.  I recognized after each of my past failures, the person I fell the most short on with my lack of commitment was me.  No one could be more disappointed in me than me.   This might very well be the same for you.

Aside from a few inspirational posts on Facebook, I stopped getting others involved and put all my energy where it belonged:  into taking action on my commitments.

As I sat down in December to do my goals for 2107, they were more specific, this time.  I did not write:  continue to work on my “dancer’s body”.  That was already in progress.  I wrote a goal that would require me to stay committed to it:  “Perform a choreographed dance solo for an audience”.  I can see the movements, hear the music, and imagine the feeling of accomplishment.  It is not the goal that drives me.  It’s the commitment.  It is the promise that when I stay focused on that commitment, my goal will be reached.   Considering how far it got me last year, I have no doubts.

My body, my mind, and my spirit were born to dance.

… And my voice was meant to sing.  (But we’ll save that goal and commitment for another blog post.  Tee hee!)

If your resolutions have already failed, and your goals have fallen short, maybe it’s time to ask yourself:  “What am I really committed to?”

Whether you were born to dance, or write a book or, or start a business, or… whatever…  get clear on what you want to accomplish and make the promise to yourself to have that, be that, do that…

Create the vision, make the commitment, keep it to yourself, and then …let your mind, body and spirit take over.

From all of me to all of you,

The information shared in this blog is based on the writer’s own knowledge, research, and life experiences of the topic. It may or may not resonate or match with your own ideas or beliefs. Either is ok.  All that is asked is that you respect the information shared, regardless. Any strong, blatant, opinion-based comments for the sole purpose of creating drama will be removed. If you do not like the content here, feel free to scroll on by. This is a forum for creating conversation, learning, and inspiring positive growth and/or change. To those who enjoy this content, thank you. You are the reason for this blog.

Are we humans having spiritual experiences, or spirits having human experiences? Pffft! Who cares. It’s all about balance. My hope is that simply by being me and sharing what I know and love, I can offer some inspiration. Why not?

This site uses Akismet to reduce spam. Learn how your comment data is processed.

(By opting in, you agree to receive my periodic newsletter containing info on upcoming events & special promotions and/or blog posts written to inspire and help you re-connect to your own authenticity, passion and joy.)

**Your info is safe with us. We don’t like spam either! 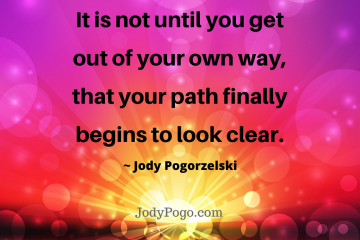 “I’ve literally tried everything!” Oh, really? Everything? Literally? I call BS. While this may sound snarky, it is what pops into my head whenever I hear someone say this phrase. No… I don’t say it Read more… 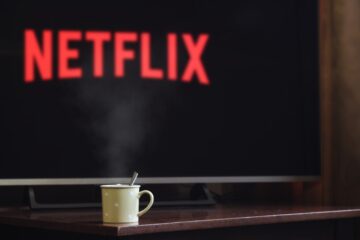 Every year, during “hibernation season”, I gift myself a month’s subscription to Hulu, Netflix, or whatever else floats my boat. My body really dislikes cold weather and by January, I feel the strong urge to Read more… 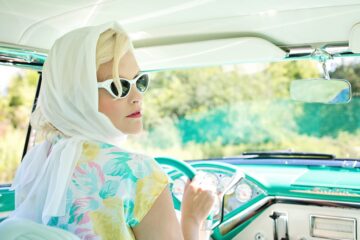 Fear: It’s what’s for dinner. And lunch…and sometimes even breakfast. Fear can consume you, while you continue to consume it. I know, I know… I said the “F” word. Again. (Not the first time and Read more…